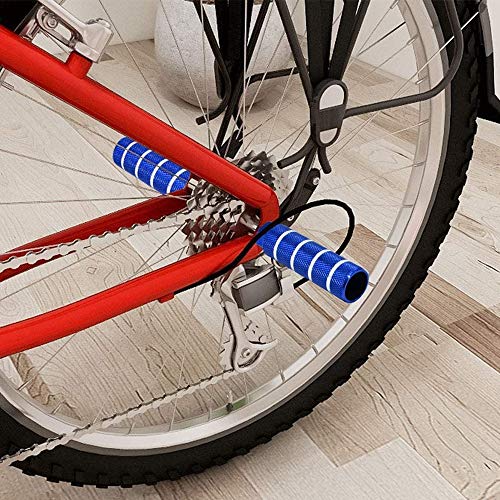 Let’s examine whether or not you can install stunt pegs on a mountain bike, as well as determine if you would even want to.

Before we discuss installation, we’ll take a look at bike pegs and what purpose they serve to gain a better understanding of our question.

Pegs are generally made for park and street bikes, as in bikes that will be used in a skate park or in an obstacle-ridden street.

These bikes are usually of the BMX variety and the purpose of the pegs is only as a means to perform stunts. The type of tricks you are able to do largely revolve around either grinding or standing on the pegs while performing some variation of a wheelie.

The two materials that pegs are made of are metal or plastic. That being said, the large majority of plastic pegs have a hollow metal core to provide added strength and rigidness.

A common misconception about pegs is that they can be used to carry a passenger. This not only puts stress on the pegs, but also on the frame and tires.

Letting your friend ride on the back of your bike by standing on the pegs is not only detrimental to the integrity of the bike, but is also extremely dangerous.

Do All Pegs Fit All Bikes?

Most pegs that you will find are attached to the bicycle via the axle bolts that run through the hub (center) of the wheel.

There are other methods to attaching pegs, but they are uncommon enough that we won’t cover them in this article.

As not all bikes and pegs are universal, we cannot say that all pegs will fit all bikes undoubtedly.

That being said, unless you have a very obscure make of bike or an extremely odd brand of pegs, the likelihood that the pegs you purchase will fit your bike is high.

Can You Put Stunt Pegs on a Mountain Bike?

The answer to this question is yes, a large majority of the time you will be able to outfit your mountain bike with stunt pegs.

You will run into specific cases where the components will not line up, and you may not be able to install the pegs, but these cases will be few and far between.

The reason why pegs can be installed on almost any wheel is that the part of the bike that they attach to is a vital component, as it holds the wheel onto the bike.

Whether your axle consists of a male bolt or two female bolts, as long as there isn’t anything obstructing where the pegs will sit, you shouldn’t have any issues with installation.

How Do You Get Stunt Pegs on a Mountain Bike?

To attach pegs to a bicycle is quite simple and requires very little time or tools.

The majority of the time you should be able to install the pegs with only a socket set, given that the set has an extender included.

For a male-style axle, you will have a nut and a washer on either side of the bike. Simply remove the nut and the washer, and you are ready to install the peg.

The peg will act as a washer, and you can place the old washer aside. With the extension and the correct size socket, slide the peg onto the axle and refasten the nut.

Make sure to tighten the nut well, but ensure not to over-tighten or cross-thread the axle, as this will lead to a headache in the future.

The female axle is the exact same process, but you will now be dealing with a bolt instead of a nut. The bolt will be directly threaded into the hub of the wheel.

Remove the bolt, place it in the stunt peg, and then proceed to refasten the bolt to the hub. Keep in mind that the peg will replace any washers that existed previously.

Here is a quick video of a person putting stunt pegs on a bicycle with a male axle:

HOW TO: INSTALL BMX PEGS

Does It Make Sense to Put Stunt Pegs on a Mountain Bike?

The reason to have pegs on a bike is right in its name, “stunt” pegs.

A person usually installs pegs onto a BMX bike to perform different flatland tricks and grinding. The only other reason may simply be for cosmetic effect.

The design of a BMX bike makes them perfect for performing tricks as they are compact and light.

In contrast, a mountain bike is designed to not only withstand the rugged terrain of trail riding but make it easier on the rider with things like brakes and gear systems.

This makes a mountain bike long and heavy, which isn’t ideal if you are looking to perform stunts.

If you ride your mountain bike on mountain trails, it makes little to no sense to install stunt pegs on your set-up.

Not only does this add unnecessary weight, but it could also be dangerous when taking tight corners, not to mention the fact that out on the trail the pegs would serve no purpose.

As the installation of stunt pegs on a bike only requires the nuts or bolts of an axle, they can be installed on almost any bicycle.

While there isn’t any glaring reason as to why one would want to outfit their mountain bike with pegs (for any reason besides cosmetic), it can surely be accomplished.

Be sure to do your research before taking anything on or off of your bicycle.

Remember that stunt pegs are not designed for carrying a passenger, and this is dangerous to both the riders and the bike.

Cycling is an extremely rewarding hobby, and each bike should reflect the personality of its owner. Have fun and be safe out on those trails.