Back in simpler times, a cyclist would only have to choose to either ride a mountain bike or a road bike.

Depending on their purpose, this choice should be an easy one:

A road bike would be great for urban cycling, while the mountain bike would make for some offroad fun.

Nowadays however, given the recent popularity of hybrid bicycles, there are more factors to consider.

If you’ve already ruled out the road bike from your considerations, how do you choose between a hybrid bike and a mountain bike?

That’s what we want to help you decide with this article.

Firstly, we’ll be looking at what defines the mountain and hybrid bikes respectively. Then we’ll take a deeper dive into some relevant factors to determine which bicycle best suits your needs. 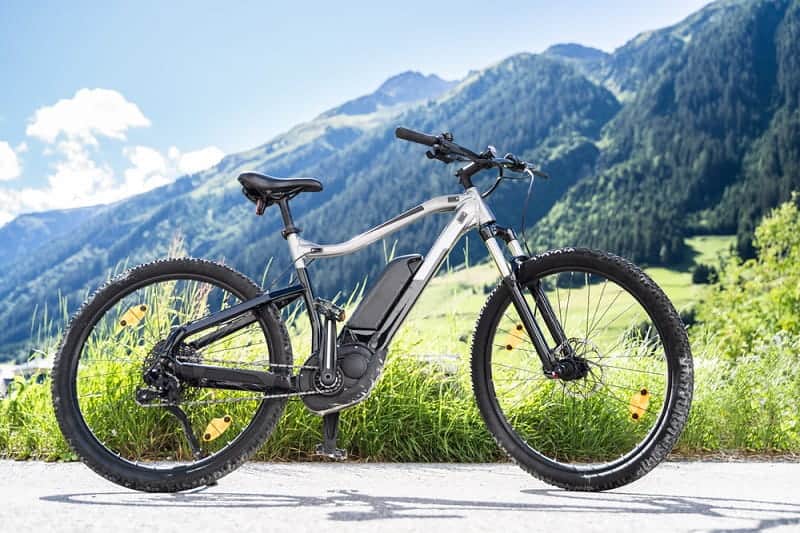 Mountain bikes have been around since the late 1800s, and for good reason are still very popular today.

One of the reasons for their invention was the need for individual transportation along dirt and rough roads – or in many cases, no roads at all!

These days mountain bikes are much more elegant and sophisticated, but some features remain largely unchanged: thick and durable tires, wide flat handlebars, and a solid heavy-duty frame.

Bikes like these feel most at home in the woods, rough and rocky terrain, and of course in the mountains!

Mountain bikes too rugged for you?

Thanks to modern innovation, hybrid bicycles are now a thing!

‘Well-rounded’ would be one of the buzzwords to describe a hybrid bicycle. As the name implies, a hybrid bike is a cross between a road bike and a mountain bike.

There are actually three basic types of hybrids, and exist to address the diverse needs of riders. Some of these types will be discussed in more detail below.

One of the most common traits of a hybrid would be its flat handlebars, similar to a mountain bike. This is unlike road bikes which have what’s called a drop bar, which helps position the rider’s body more aerodynamically. 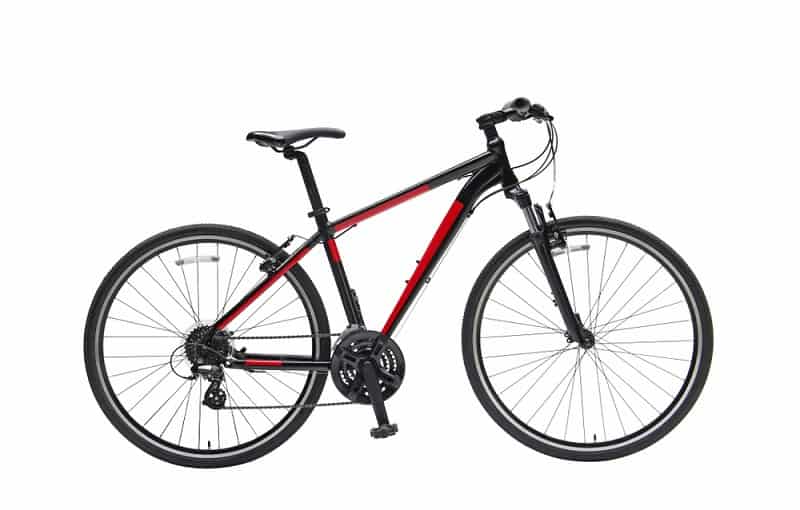 On the other hand, hybrid bikes are made to be lightweight and speedy in urban settings which is very much like the road bike. 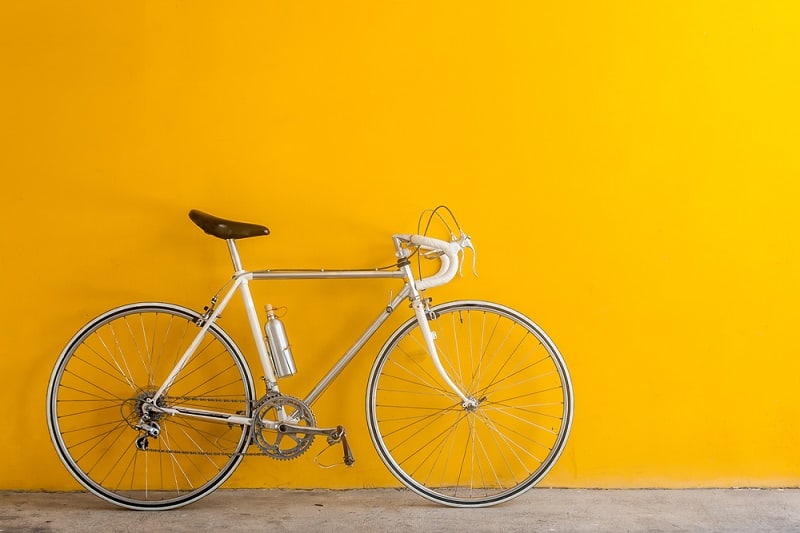 True to form, some hybrids are also capable of rolling through both rough terrain as well as smooth city roads. This versatility is really what makes the hybrid so popular to the modern cyclist.

Diving Deeper: Some Factors to Consider

Armed with that bit of clarity regarding the two types of bikes we’re looking at, let’s consider some aspects where each bike differs from the other.

A typical hybrid bicycle has a short reach and long stack.

The term ‘stack’ refers to the distance vertically between the bottom bracket’s center and the center of the top of the head tube.

The bottom bracket is usually the part of the bike’s frame where the bike pedals are located.

The head tube is the part of the bike where you attach the handlebars.

Meanwhile, ‘reach’ refers to the horizontal distance of those same two points.

Whew! That’s a lot of terms! Hopefully the image below will help illustrate these measurements: 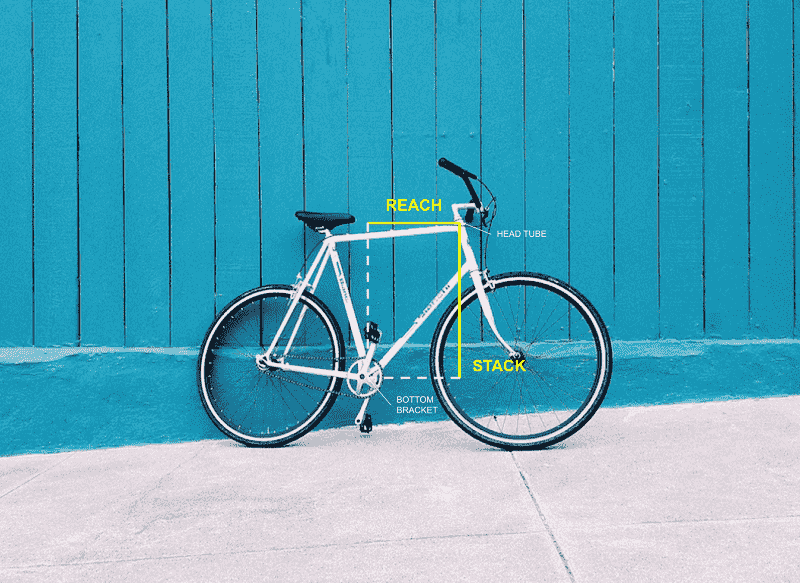 Since the hybrid has a long stack, the rider’s position would be more upright on a hybrid compared to your typical road bike.

However, because it has a short reach similar to its road bike cousin, the hybrid can still force the rider forward towards the handlebars. This makes for a more aggressive stance when you want more speed and force on the pedals.

On the other hand, the mountain bike typically has an even longer stack than the hybrid, especially in the latest models and trends. This makes the rider’s spine more upright, which makes for a more stable ride.

There’s much more to discuss when it comes to fine-tuning your bike’s geometry. Newer mountain bikes also tend to have a slacker steering angle, which can improve rider comfort. 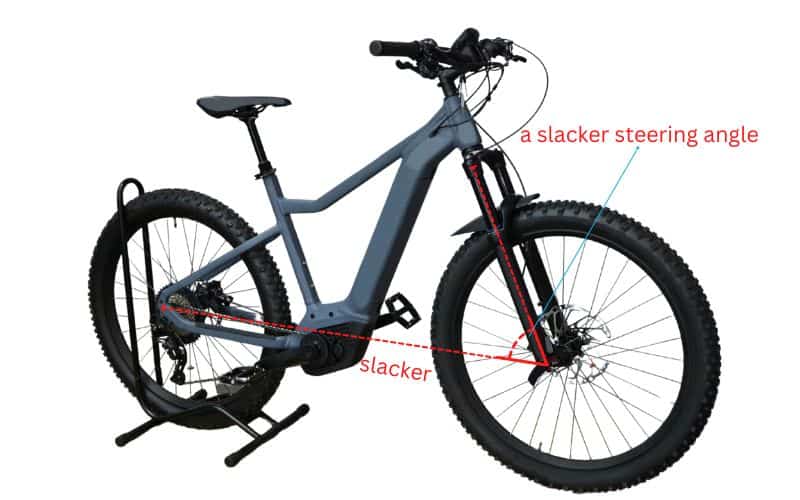 Now before you think that’s vain, do consider that the more comfortable a rider is, the longer distances they can cover during a ride! So comfort isn’t something to sneeze at.

Depending on the style of hybrid, the bikes can either have a slack or a more aggressive steering angle if they’re closer in design and intention to road bikes.

A bicycle’s weight can have varying significance to the rider. If you’re carrying your cycle every day while commuting for example, then weight would be a big deal.

Hybrid bicycles tend to weigh from 26 to 29 pounds.

The hybrids designed to function like road cycles tend to be lighter. Hybrid bikes designed more similarly to mountain bikes are heavier. 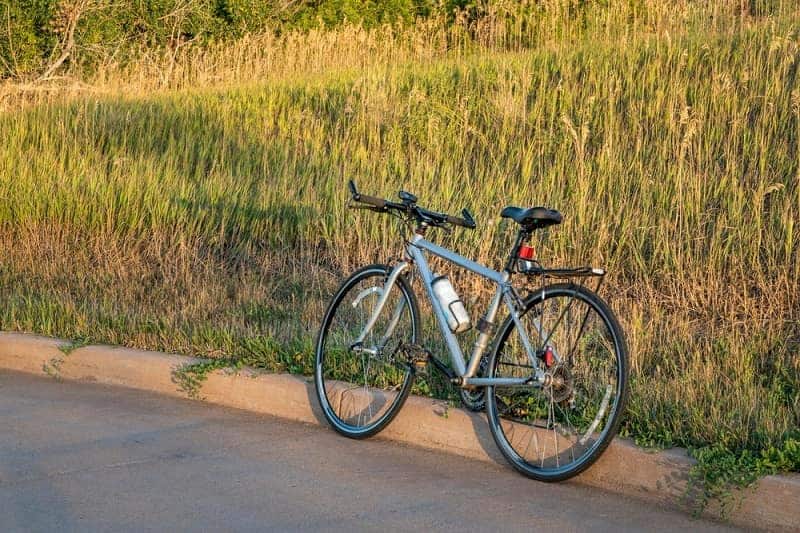 Mountain bikes typically weigh from 28 to 32 pounds due to a number of factors.

They tend to have wider and thicker tires compared to other types, which adds to the weight. These tires are usually of the 29-inch variety and have aggressive treads for better climbing and traction. 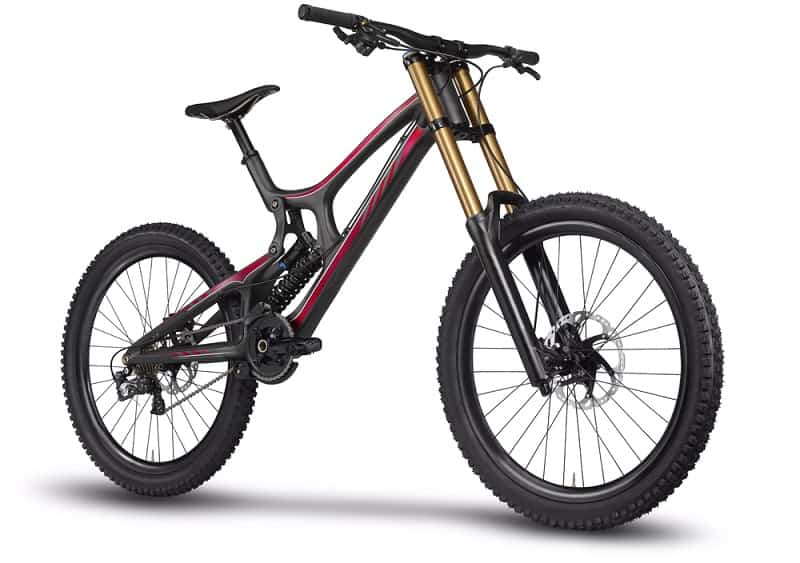 Also, the more components you add to your bike, the heavier it becomes. That means a hybrid bike with added mounts and accessories would weigh as much as a mountain bike!

Another aspect that adds to a bike’s weight is the material used for the frames.

Hybrid bikes, given their adaptability and versatility, are usually made of aluminum. This makes the frame light while remaining plenty durable.

High-end hybrids may even be made of carbon steel, which is even lighter than aluminum but just as hardy, if not tougher.

Mountain bike frames, as one would expect, should be made of materials that can take a lot of abuse on off-road trails. 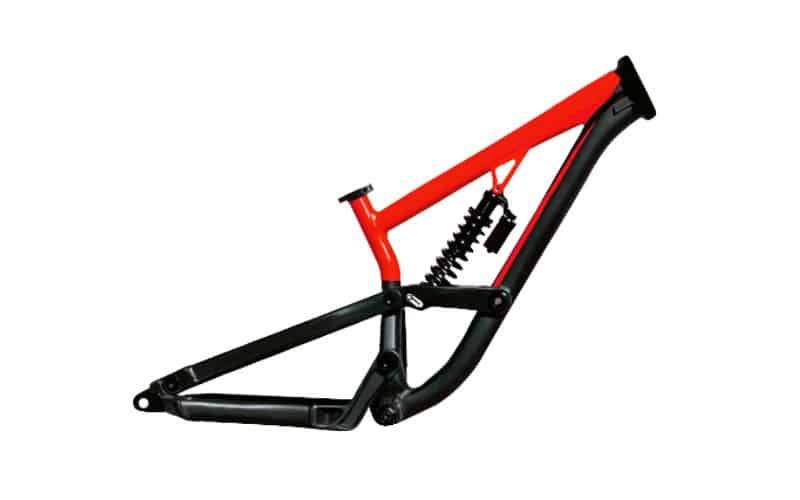 These frames are usually made of steel alloys, which tend to be heavy. Since steel is cheaper compared to other frame materials, these shouldn’t be too hard on your bank account.

There are mountain bikes out there that make use of carbon fiber as well, giving you the best in both weight and durability, but don’t expect them to be cheap!

Next up on our list of considerations is the terrain, or where you plan to ride your bike most frequently.

As we noted above, mountain bike treads are more aggressive to get better traction on rough surfaces. A mountain bike would be most at home in terrain like gravel mud, sand, or any uneven trail. 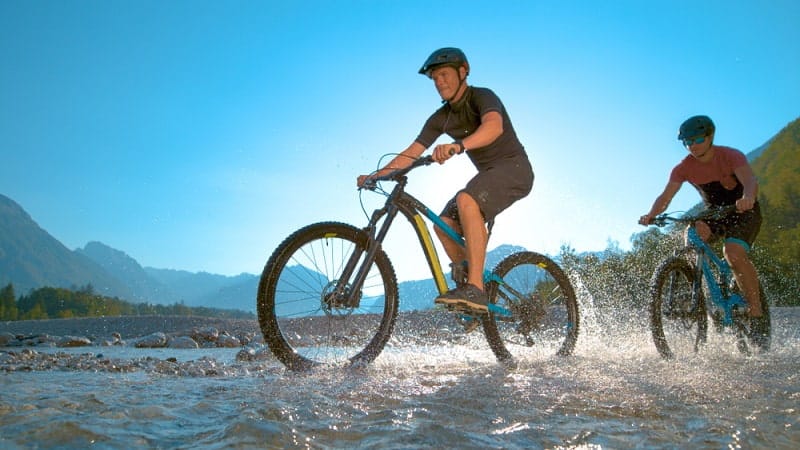 There are a variety of mountain bikes that specialize in different kinds of styles and terrains.

Some of the most popular types are the trail mountain bikes, which have 27.5-inch or 29-inch wheels. These monsters can handle rougher terrain and are adept at climbing uphill and descending slopes.

Can you ride mountain bikes on pavement? Yes, but it won’t be the optimal choice. 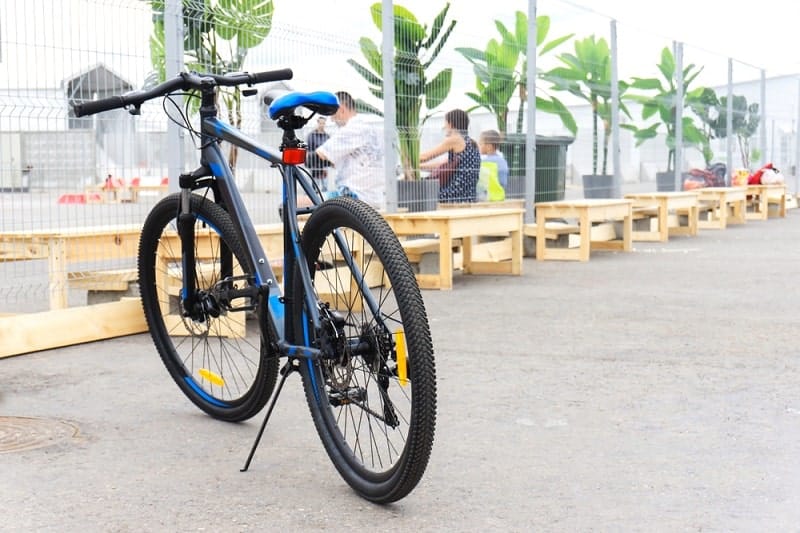 Mountain bikes aren’t typically outfitted with lights or reflectors like the common road bike, for one thing.

The way the MTB’s tires are designed also make it harder to ride on asphalt, making them much slower than other bikes.

On the other hand, some hybrid bicycles are designed to also handle trails and rough paths.

The dual sport hybrid, for example, can roll well on both paved roads like a road bike and uneven terrain like a mountain bike.

Borrowing from the mountain bike’s design, this hybrid has front suspension forks and hydraulic disc brakes, making it easy to handle and dependable whether riding uphill or downhill.

Because the hybrid also has thinner and narrower tires compared to the mountain bike, it can go much faster on these varied terrains. It can also accommodate a wide range of gears, which sets its versatility even higher compared to the MTB.

Additionally, most hybrid bicycles also come with mounts and places to attach mudguards, lights, and pannier racks. This makes it more conducive to cycling on the road where there’s more traffic.

However, if you’re planning to spend more time in the woods or mountains than on light trails and asphalted roads, then nothing beats the heavy-duty mountain bike.

Most of the stuff we’ve looked at in the above considerations contribute to how affordable the hybrid vs. mountain bikes are.

It all boils down to components:

More components means higher prices. The frame, tires, brakes, suspension, and gears all contribute to how pricey the bike is going to be.

Mountain bikes typically have big wide tires, heavy frames, and complicated drivetrains which can cost more than a hybrid, which generally have smaller and lighter counterparts. 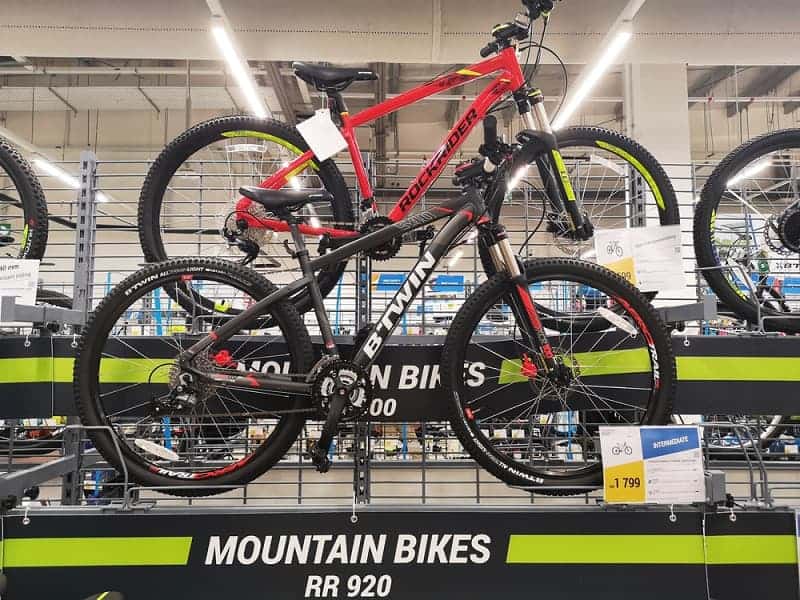 Meanwhile, since the hybrid strives to be a more “laid-back” and “casual” approach to biking, its components generally cost less than that of a mountain bike. 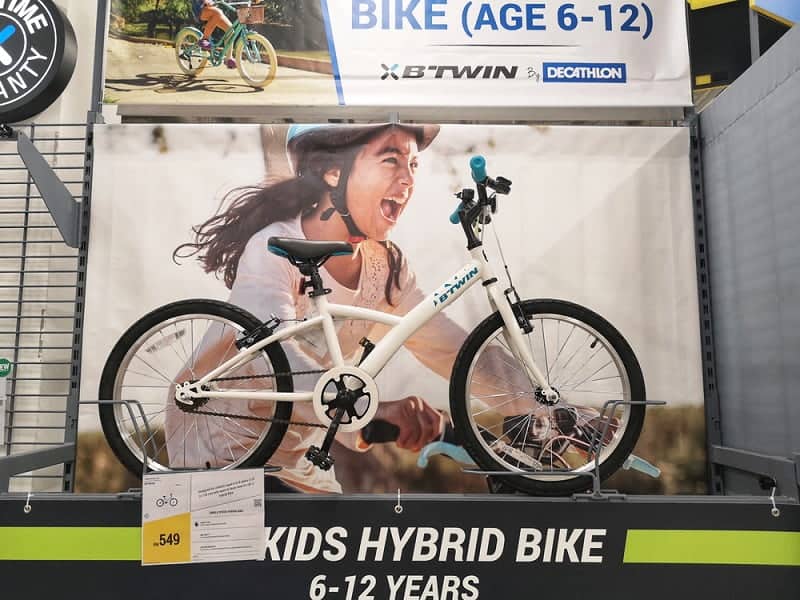 However, some additional features that hybrids have like front suspension can also hike up their price.

In other words, there are price ranges where mountain bikes and hybrid bikes meet, but the more specialized and higher-end MTBs do cost more.

We hope all the information above clarified the differences between a hybrid and a mountain bike, and proved helpful to your decision-making.

Whatever your choice would ultimately be, we hope you take care out there, whether on the road or on the trail!