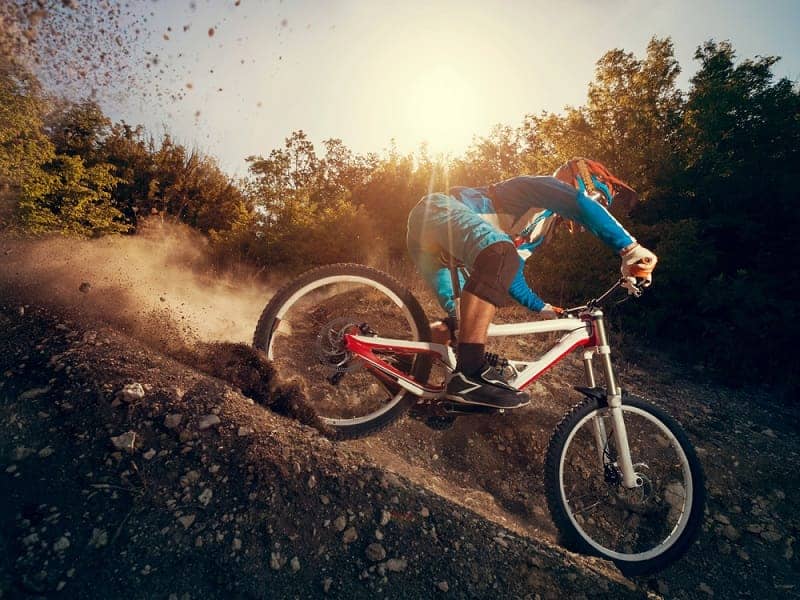 If you’ve ever tried mountain biking, you’ve probably experienced how exhilarating riding downhill can be. And like most enthusiasts, you’ve also probably wondered, “Exactly how fast can you go downhill on a mountain bike?”

Bikers go uphill at a speed of 13 kph or 8 mph. Once they reach the downhill section, that speed doubles to around 27 kph or 17 mph – sometimes even faster.

This article looks at how fast bikers can go downhill on their mountain bikes. We also answer some of the most frequently asked questions by cyclists.

What Factors Can Affect Speed While Cycling?

There are several factors that can affect cycling speed, including strength, resistance, and weight. Strength is one of the most significant factors influencing how fast you go uphill or downhill on your mountain bike.

The harder you pedal, the better you handle resistance, and the quicker you can go.

Unfortunately, not everyone has the same level of strength. So, before you start comparing your speeds to that of your cycling friends, check how much effort you’re exerting. This way, you can see if there’s any way to increase your strength. If you’ve tried cycling through a stiff headwind, then you know exactly what wind resistance feels like – it’s EXHAUSTING.

To push through resistance, you’ll need to exert more strength and energy and reach a certain level of aerodynamic efficiency. Otherwise, you’ll be stuck in an aerodynamic drag, which pulls you back while cycling and slows you down by 70 to 90%. Excessive weight on your bicycle wheels and other components can intensify inertia, causing you to slow down while cycling.

It can even affect your balance as weight can warp your wheels, causing you to swerve. Thus, heavier riders may need to work twice as hard as their thinner counterparts to maintain the same pace.

How Fast Can You Go Downhill on a Mountain Bike? Assuming that weight, resistance, and strength are all acceptable, the average speed of a biker going downhill is anywhere between 27 kph (17 mph) and 48 kph (30 mph).

According to a study conducted by the University of Central Lancashire in 2006, it was found that the average speed of a cyclist going down a “technically demanding” singletrack trail ranged between 17 kph (11 mph) and 27 kph (17 mph).

26ers have been the standard mountain bike wheel size for decades. It’s popular for its maneuverability, strength, and responsiveness. Plus, they have decent acceleration and handling, which a lot of beginner cyclists appreciate.

While both wheel sizes technically have their unique purpose, when asking the question “which is faster,” the answer is almost always the 29ers.

Studies show that 29ers are 1.8% faster than 26ers. Thus, they are the go-to choice for cyclists participating in tournaments and races.

Is 22 Mph Fast on a Mountain Bike?

22 to 25 mph is considered the average speed of a mountain bike. In fact, cyclists can achieve much higher speeds with the right combination of strength and aerodynamic efficiency.

Why Are Mountain Bikes Slow?

It’s true that mountain bikes are much slower compared to road and gravel bikes. This discrepancy may have something to do with their larger tires, heavier weight, longer frame geometry, less aerodynamic body position, and even less efficient gearing.

Luckily, there are ways to make your mountain bike go faster:

Mountain bike tires don’t require as much pressure as gravel or road bikes.

However, if you’re not tackling particularly tricky terrain, increasing the air pressure in your tires can help improve your bike’s speed.

What is a Mountain Bike Lockout [more about lockout in article]

Energy is absorbed by your bike’s suspension each time you put effort into pedaling. To decrease this, locking the suspension and making the bike pedals a little stiffer can make your bike more efficient.

This change adds more torque to the pedal, helping you accelerate much quicker. Make sure you’re not carrying any extra weight with you while cycling. This includes backpacks, bicycle baskets, and anything else that could reduce aerodynamics.

Extra weight can also cause significant deformation to your tire’s sidewalls, which adds rolling resistance to your tires.

This is why some cyclists even go as far as to lose a few extra pounds of body weight.

Mountain bikes can get dirty, grimy, and muddy over time, especially if you regularly use them.

Keeping the gears and other parts clean can help keep your bike in tip-top shape. Dirt and mud will only slow you down on your rides.

Here’s a video on how to properly clean a mountain bike:

50 mph on a decent hill is doable for anyone with experience. 60 mph could be a lot more challenging to achieve. However, it’s not entirely impossible.

You‘ll have an easier time reaching 60 mph on a road bike driven over relatively smooth terrain.

What Is the Fastest Bike Speed Recorded for Downhill Sections?

Éric Barone has set the record for riding downhill on a mountain bike, notching a top speed of 227.720 km/h (141.498 mph) as he descended a snow piste in the French ski resort of Vars.

The 56-year-old Frenchman, nicknamed ‘The Red Baron’, broke his own record of 223.3 kph (138.75 mph), which he set on the same course in 2015, to retain the title of fastest ever downhill record, despite suffering a huge speed wobble mid-way through the attempt.

Can You Safely Stop While Going 40 Mph Downhill? Many people are preoccupied with how fast they can go, but the true question lies in how fast you could go while also being able to stop safely.

If you’re cycling 40 mph downhill and decide to brake midway, it could result in serious injuries. Some cyclists even say that braking at that speed on a mountain bike would be more difficult than braking in a car.

The faster you go, the harder it will be to brake because you’ll be working against gravity.

How Can I Ensure an Accident-Free Descent?

Cycling at fast speeds downhill will be easier for professionals than novice cyclists. If you’re a beginner, the following tips should be able to help:

One of the most common mistakes beginner cyclists make when riding downhill is not fixing their posture.

It’s not uncommon for novices to lock their elbows on steep descents. This position could cause some pretty grizzly injuries if anything goes wrong.

Instead of straightening your elbows, a much better choice is to bend them a little so your elbows absorb less of the shock while driving downhill.

Additionally, you want to put most of your weight on the middle of your seat. Make sure your shoes are pressed firmly against the pedals, too.

This position will help you stabilize, especially on particularly tricky tracks.

When riding downhill, it’s important to keep your eyes forward instead of fixated on the ground. This will help you avoid crashing into trees or falling into unnoticeable cracks on the road.

Generally, cyclists want to do a maintenance check on their mountain bikes to ensure everything is still working.

One of the components you should pay close attention to is the brakes. These little guys will help you maneuver through particularly challenging terrain.

Here’s a quick video on how to check your MTB before a ride:

While mountain bikes have generally been regarded as slow and inefficient, they’re actually capable of speeds similar to road or gravel bicycles.

It’s possible to increase this speed to a solid 50 mph. However, if you’re wondering if you can do  60 on a mountain bike, this would be a bit of a stretch.

Before taking your mountain bike out for a ride, make sure to check its components first to avoid dangerous errors on the road.

If this is your first time riding downhill trails, it can be tricky to get started. Luckily, there are ways to make the transition a lot easier for you.

Adjust your posture when riding downhill. Keeping your elbows locked can lead to major injuries that could impair your mobility. It may even cause you severe injuries that prevent you from ever cycling again.

Keep your feet steady on the pedals, and make sure your weight is positioned nicely in the middle of your seat.

This stance will keep you stable while moving at high speeds, helping you to avoid crashes and slips as you ride.